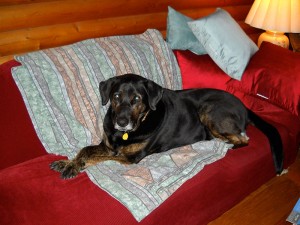 King was a GSD-Lab mix. He was born at the end of March, 2001, which made him an Aries. If you believe in astrology, truer words. Stubborn, impulsive, energetic, “I AM The King!” Too smart by half. I found him during a check of my company want ads, where I noticed a posting for a 12-week old male puppy. Prince, our previous dog, had been gone for two years by that point, and it was time. I went with my dad to check out this puppy, and found a 28-pound bundle of energy bouncing around with his equally energetic mom and sis. Exuberance as a genetic trait. What I’m trying to say is that I had plenty of warning.

I still brought him home.

By the time King turned 11, it was obvious that he had slowed down. He was still as nosy and vigilant as ever, but he also slept more, and those spurts of flat-out dashing about were no more. He developed a fondness for napping on the couch, and couldn’t seem to understand that at one hundred fifteen pounds he didn’t really qualify as a lapdog.

On September 30, 2012, King started acting strangely. Over the course of the day, he lost his appetite, and by late afternoon, he wasn’t really responding to me and seemed reluctant to move. I took him to the emergency clinic, and soon received the news that I had been dreading for a while. King was bleeding in his belly. The likely cause was a cancerous lesion in his liver. He underwent surgery the next day; his spleen and part of his liver were removed. The diagnosis was hemangiosarcoma, a cancer common in GSDs.

After surgery, I brought him home. I decided to try chemotherapy even though the chance of a cure was damn near nonexistent. Treatment allowed us five more months together. Five more months during which King could enjoy treats and play with Gaby and bark at the mailman. Five months for me to say goodbye. 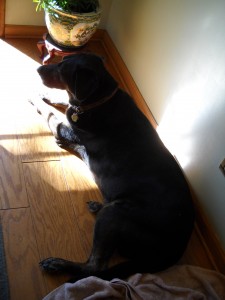 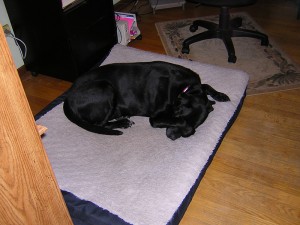 Mickey was a black Lab mix who came from a local shelter. He was supposedly three years old when I adopted him in early 2004, but that may be a question for debate. He was much more of a couch potato than King. I don’t know if that was due to age or joint issues or simply The Lazies.

Mickey didn’t seem to know what to do with toys when he first came here. If I threw a ball, it would be up to King to chase it down–Mickey would run after King, but he didn’t seem interested in the toy itself. Over time, he learned to play. He enjoyed tug o’ war and fetch, and also liked to chew on Kongs–they were the only things that could survive his jaws. He loved tennis balls with a passion, but after chasing them for a few minutes, he preferred to concentrate on peeling off the felt, then tearing the ball to bits. He and King could wreck a new ball in five minutes.

His personality was the opposite of King’s. Very passive aggressive. He was good at ignoring voices he didn’t want to hear, and would simply turn his back on me if he wasn’t interested in playing or being petted. His pillow was located in my office, and he took over the place. If I tried to work much past eight or nine pm, I could sense eyes burning holes in my back. I would turn, and find Mickey curled up on his bed, staring sadly. Go away, the look seemed to say, and turn out the light as you leave.

On 5 July 2008, I took Mickey to his regular vet. He’d been off his feed for a few days, and seemed lethargic. The initial diagnosis was pancreatitis, along with a flare of his existing gall bladder issue. The treatment was hospital food (white rice and a gradual increase of his usual food), antibiotics, and stomach meds.

After a week and a half of treatment, it became obvious that he wasn’t getting any better. I took him to see a specialist on July 17. A few hours later, an ultrasound was performed. The results were devastating. Mickey had cancer of both the liver and bladder, and had a couple of weeks left if we were lucky. We weren’t. I had to take him on that final ride to the vet six days later. His ending was as peaceful as it could have been, though not as peaceful as he deserved. He deserved fifteen years, ending with quiet passage in his sleep. Not this. Not this.

I’ve mentioned this elsewhere, but there was so much I didn’t know about that dog. For recordkeeping purposes, we assumed his birthday was 01/01/2001, but one of his vets thought he was likely several years older. He’d been abused in his earlier life, but managed to put at least some of that behind him during his time with me. He went from being a silent Stepford dog to a rather vocal and occasionally disobedient one, yawning and hacking like an old man, grumblefussing when I had the nerve to turn on the office light when he was trying to get some sleep, and greeting me with loud barking when I came home from work. 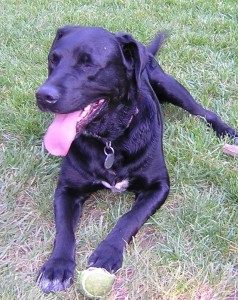 This is my favorite picture of Mickey. I took it after he’d been with me a few months. He looks happy, almost as though he’s laughing. There’s a tennis ball nearby, which he was in the process of skinning and shredding. As I mentioned above, tennis ball destruction was one of his favorite pastimes. He could keep up with King pretty well back then, chasing him around the yard, face-fencing, and on one memorable occasion, colliding with him and knocking him over backwards, after which King bounded to his feet with an expression of ‘WOW–let’s do that again!” Mickey’s besting King physically didn’t happen often, however. It usually worked the other way around, with King pushing matters beyond Mickey’s ability to respond or tolerate. After a year or so, Mickey eased off on the rough play. During his last year, it pretty much disappeared. It was during that time that I realized that he was becoming an old dog, still peppy at times, but much more inclined to stroll at his own pace and take it easy.

There will always be a Mickey-shaped hole in my life. I’ll miss him forever. He was a wonderful dog, and I was privileged to have had the pleasure of his company. 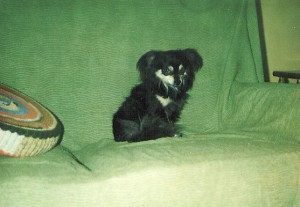 Tiger was a pedigreed long-haired chihuahua. We got him in 1967 or 1968. I went to an after-church get-together at a neighbor’s, and found to my surprise and delight that he and his wife bred dogs and what’s more, had PUPPIES!! to show off at the party. I have always had a preference for black-and-tan dogs–Tiger’s little brown sibs were cute, but I spent the afternoon playing with Tiger and one of his sisters. Wound up taking Tiger home and asking the classic question, “Mom, can I keep him?” He was a good watchdog, and pretty rugged for a little guy. We had him seven years, and unfortunately lost him in an accident. 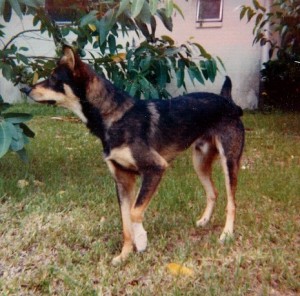 We got Prince from the animal shelter a few days after we lost Tiger. We think he was part shepherd, and possibly part hound of some sort. He only weighed 45 pounds when he hit adulthood, but he was feisty with it. That bandage on his foot was the result of a torn claw mishap–as I took this picture, he was limping/hopping around the yard as if it never happened. He’s the guy that ran away when he was 11 years old, jumping a fence and taking off. My dad combed the shelters in search of him, and found our next Prince in the process. 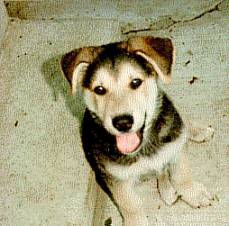 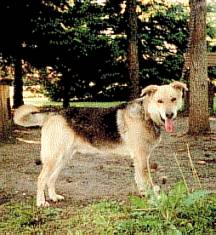 This was Prince**, who died mid-1999 at the age of 14. His puppy pic is from 1985, and his full-grown puppy pic is from 1990. He was a shepherd/lab mix, a pound puppy who was the last of his litter to be adopted. I dedicated RULES OF CONFLICT to him. He was the best.

**yes, my folks tend to stick with the same names–they’ve had a total of 4 Princes over the years. The name was officially retired in 1999.