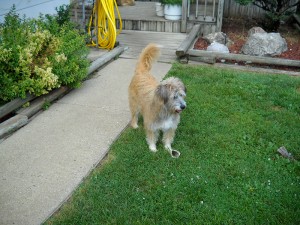 Someone left Gaby tied to the front door of my vet’s office on August 18th, 2008, and the best estimate at that time was that she was about a year and a half old. The King and I had lost the Mickster (see Remembrance of Puppies Past) the month before, and King had taken the loss of his buddy so hard that the vet was concerned. I knew I wanted a second dog, but Gaby was extremely underweight at 26 pounds and I feared that she was too small and that King might hurt her without meaning to. Still, the vet persuaded me to give her a try, and that Friday I brought her home.

I shouldn’t have worried. She and King started playing as soon as entered the backyard. She was the best thing that ever happened to him. She nipped his back legs and nommed on his face and goaded him into chasing her. They played tug o’ war or tag or simply raced around. King had slowed down in his old age, but his little sister kept him young. 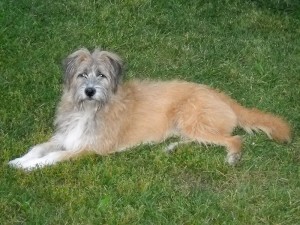 Queen of all she surveys.

Gaby went through some pretty nasty GI issues over the course of our first year together, which led to multiple trips to the vet and a visit to a specialist. The diagnosis? Inflammatory bowel disease. So far, I’ve been able to manage it with a commercial raw diet and twice daily doses of famotidine. The good news is that she is thriving. Her coat, which had been thin and coarse, is now silky soft and very thick. She’s also put on a bit of weight, and now weighs about 37 pounds. She’s bold and bouncy and sweet and smart. Did I mention sassy? I would say she looks sassy, wouldn’t you?

I first had Gaby’s DNA tested in 2008. I knew there had to be terrier in there somewhere, and I wanted to see if the breed could be determined. Sadly, no. What did pop up was…husky. And American Eskimo. Everything else was below the level of detection.

Seriously, no rodent is safe.

This past year, I had her retested in the hope that levels of detection had improved. Well, they had, but not in the way I had hoped. Yes, there is terrier in there somewhere, but breed still cannot be determined. There is also some Working Group present, but the exact breed is also below LOD.

There is, however, husky. A LOT of husky. As in, possibly one whole side of her family tree. As for the other side, along with the LODs, there appears to be Beagle and Chow. Again, stubborn breeds with high prey drive.

Can’t argue with that. 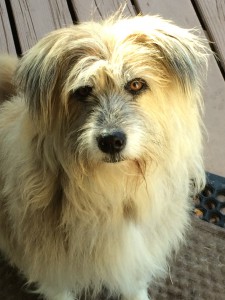