Mostly good, for which I’m thankful. Firstly, the Zombies Need Brains’ Kickstarter reached its funding goal, and even hit a couple of stretch goals! If you pledged, thank you. Looks like Kris will be writing a solarpunk story.

Sidebar: there is an open call for submissions that runs though the end of the year. ZNB is a SFWA pro-rate market and a few stories from these anthologies have been nominated for awards, so if you have a story that’s ready to go or feel the urge to write one, why not give it a shot?

My pup, Gaby, who is 15 1/2 ** and was diagnosed earlier this year with canine cognitive dysfunction, is doing okay. She sleeps more now. Eats less. Is a little shaky when she first wakes up. She still has her bouncy moments, but it’s still hard to accept that this time last year she was still her old Gaby self. It can change so fast.

In more medical news, I am now an epi-pen person. Last summer, I was stung by paper wasps three times in a matter of weeks, which can often lead to development of allergies to said stingers. After testing, it was determined that I am allergic to paper wasps, yellow jackets, and white-faced hornets  (which are more closely related to wasps rather than hornets). Further skin testing for yellow faced hornet and honey bee proved negative for which I’m glad because honey bees, come on! Allergy shots are probably in my future.

Sicilian gelato update–my attempt to make a strawberry version, while not a total failure, didn’t succeed particularly well. The grocery store strawberries weren’t the tastiest, and I think I didn’t prepare them properly. Instead of making an uncooked sauce, I should’ve made a cooked sauce with a little sugar and some corn starch. The issue was that the water in the fruit lent a slight grainy, watery mouthfeel to the end product. Corn starch binds water, which is why the plain vanilla version came out pudding-smooth. The next batch–I’m trying to decide between almond and orange flower–will be a return to the old formula and will I hope come out nice and creamy.

**This is a guess because she was a rescue.

In closing, here’s a photo of a honeybee, to which I am not allergic, feeding on the volunteer goldenrod in my yard. 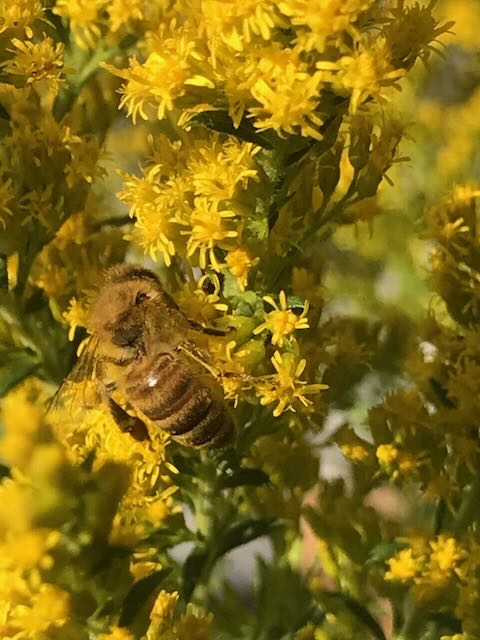 Honeybee, to which I am officially not allergic