So for Reasons, I can’t eat high-fat foods like super-premium ice cream, frozen custard, or anything made with too much animal fat or vegetable fat like coconut oil. Gelato was a great discovery since it’s made primarily with milk, but some brands contain a high proportion of cream, which means nope. I thought I could overcome any and all problems by making my own, so a few years ago I bought an ice cream maker and christened it with a really lovely recipe for espresso gelato. I thought because the milk:cream ratio was 2:1 that it would be okay. But eggs were used as the stabilizer and between that and the cream, more nope. So I stuck with grocery store brands and even some nut and oat milk frozen desserts. Overall, they were okay, but I always wondered if I could make something better. I knew there had to be all-milk recipes out there in the internet void. I also had vague memories of Sicilian gelato, which used corn starch instead of eggs as the stabilizer. But for some reason I thought it was non-dairy, like a thickened fruit purée or sorbet, which didn’t interest me.

Fast forward to a few days ago. I ran my search for recipes, and again found mentions of egg-free gelatos that used corn starch as the stabilizer. I decided to try this recipe for Sicilian Gelato-Style Ice Cream because it contained only five ingredients and looked pretty simple. I’ve used corn starch to thicken sauces and gravies, and knew it could be tricky because it loves to lump up. But with an egg recipe you run the risk of winding up with sweet scrambled eggs, so. Risk is risk–tie on the apron and get on with it.

My only problem was a lack of vanilla beans. I solved that crisis by digging some of the pod pieces out of an older bottle of vanilla extract–I scraped out the seeds and added those to the milk mixture.

There were more seeds than I thought: 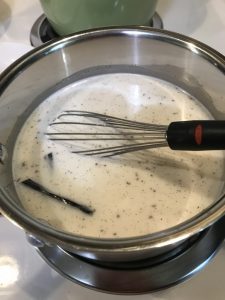 It took a while for things to heat up. I never saw the steaming described in the recipe, so I looked up the temperature at which corn starch cooks and found it: 203F. I whisked and whisked and checked the temp–even in the 180s/190s, I saw some thickening. Then, finally, I saw the occasional glub (think bubbling lava but without the bubble bursts) that indicated the mix was beginning to boil at, hey, 203F. It actually hung at that temperature for a couple of minutes before starting to rise again. Overall, I let it thicken and glub for 5-6 minutes. 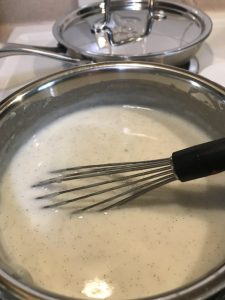 I let the mixture cool atop the stove, then stuck it in the fridge for a few hours. When I took it out, it was semi-solid and smooth. I tasted it–the flavor reminded me of tapioca or vanilla pudding. Then I set up the ice cream maker and let ‘er rip. 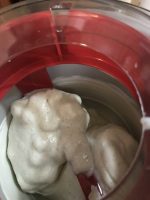 Not liking those lumps 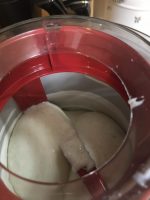 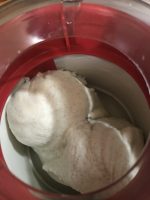 Overall, it took maybe 10 minutes to churn a little over three cups of gelato.

It was a challenge to scrape out of the freezer bowl, but that just gave me an excuse to sample the result. Rich-tasting–even my old vanilla beans imparted more flavor than I’ve found in any store brand vanilla gelato. Very creamy, like thick pudding. I looked up frozen custard, and found that it’s churned so that it incorporates less air and remains dense and creamy. That pretty much describes this gelato. Shiny, smooth–the rough patch in the photo below are the scrapings from the inside of the freezer bowl. 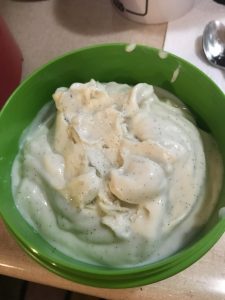 Ready for the freezer

Next time, I may cut back on the corn starch, or even try a different starch like arrowroot as the thickener. Overall, I’m surprised at how well this worked and I’m looking forward to making more. Chocolate! Butter pecan! Cherry almond!