A couple of years ago, I planted some common milkweed seeds in a sheltered area by my deck. Last year, a single plant sprouted, but it only grew to a foot, foot and a half. Didn’t flower. Finally succumbed to the drought.

This year, two plants sprouted in the same spot. We had decent rains this spring as well as cooler temps, and the plants grew and grew. They’re now maybe three feet tall? No flowers yet, but lots of nice, big leaves. Last week, I spotted a Monarch butterfly flitting about them–it would rest for a moment, fly off, then return. It did this several times. A couple of days later, I checked the undersides of leaves and found five of these: 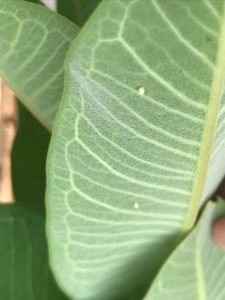 Some online research followed, during which I learned that the eggs hatch after only 4-5 days. Sure enough, on July 2, I counted five little widgets: 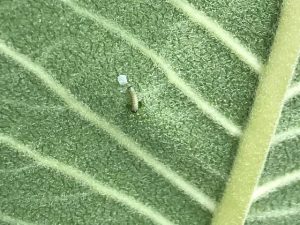 The next day, I didn’t have to look under the leaves to spot them because I could see the blemishes and holes on the topsides. I also found holes with no visible caterpillars. I don’t know how mobile they are, and if they could crawl or fall through the holes and wind up on other leaves. There’s also the possibility that there were more than five caterpillars and some have already been lost. According to one article I read, only 2-10% of hatchlings in the wild make it to adulthood. 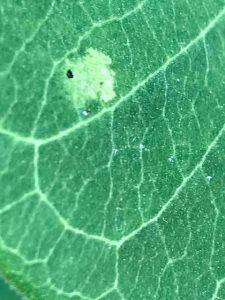 As of this morning, I could still find five caterpillars. That said, I’m not sure if they’re the same ones I spotted initially since as I said some are on different leaves and one rebel is on the topmost leaves of one of the plants. They look about twice the size they were on the 2nd, and the dark bands are visible now. 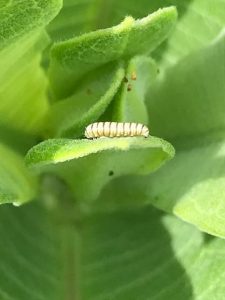 My concern was that a single caterpillar can strip a milkweed in the two weeks or so that it spends at the various caterpillar growth stages, and I only had two plants. Luckily, a friend let me dig up a half dozen of their milkweeds. I planted them as soon as I got home and watered them thoroughly, but milkweed can be hard to transplant–all 6 have wilted and may drop their foliage. But I’m hoping that the leaves remain monarch-sustaining long enough to see the little bits through this stage of their development.