Sprouts verdict: The little bit I was able to harvest had a surprisingly strong herbal taste that I really liked, but I was disappointed in the sparse crop. I haven’t tried a repeat, but if I do I will double or triple the planting. One teaspoon of seeds isn’t very much. 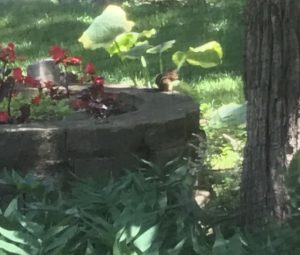 I’ve seen two chipmunks around the property. One lives under the backyard deck; the other has taken up residence…or at least stashes its food supply–in the front yard planter. I don’t know if they’re returnees or new tenants. Eastern chipmunks live three years in the wild on average, and given that I live a stone’s throw from a wooded preserve inhabited by coyotes, foxes, and feral cats, I doubt many chippers live that long around here.

Gaby is holding steady. She’s slowed down because Old Girl + Summer Heat. Our morning walks have been put on hold because of the heat, but every so often she chases a rabbit or chipmunk and it’s almost like younger days.

I’ve just been through some allergy testing and learned I’m allergic to a few types of wasp. I’m an epi-injector person now! Yea? There are likely going to be be shots in my future–I work outside a lot, wasps are everywhere, and I really don’t want to have to worry about being stung.

In technical news, life without cable is going more smoothly than I thought it would. I’ve replaced my old favorite ambient music channel with  artists old and new-to-me–Delerium, Erik Wøllo, Ivy–and boy am I glad I never got rid of my CDs. I also bought decent speakers for the Ion turntable and dug out the vinyl that has spent the last 30+ years in my basement. Some of the inner sleeves needed to be replaced and jackets wiped down and set out in the sun because mildew, but the LPs themselves were easy to clean with some stuff from Groovewasher and wow but it’s been great to listen to my Bowie albums again. I know the Ion isn’t the most deluxe turntable in the world. I originally bought it to convert my vinyl to digital audio, but decided Why Bother when I could just play the records. Yes, they do sound better. I’m looking forward to sorting through the collection and rehabbing jackets as needed…and probably buying more records.

CDs. Vinyl. I feel so retro.