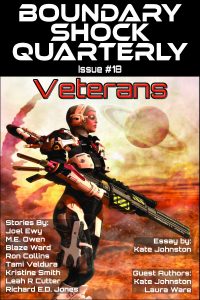 The Spring 2022 issue of Boundary Shock Quarterly is live!

This issue contains my story, “Breakaway,” which I’m really pleased with. It wound up in a very different place than initially planned–a perfectly good plot derailed and Gia’s slipped in to take its place. A story about the love of flying, flights not taken, and how the past never stays buried for long.

The joys of being a pantser. No matter how I try to work out all the details and how solid the story seems, the characters organize and mount a counterplot.

Gia slumped in a chair, hugged her knees to her chin. Admitted to herself that she had always expected this. She remembered that morning as though it were yesterday, turning onto the control room corridor in time to see Del slip out. He had his go-bag slung over his shoulder, packed with everything he needed for a long-haul trip. They had stared at one another, and she asked him what the hell he thought he was doing.

“He said something, but I didn’t hear it. It could’ve been good morning, or hello. I don’t know.”

As it turned out, it didn’t matter how many times she denied. They didn’t believe her, and they never would. They thought she lied.

And they were right.