Way back in 2005, at the World Fantasy Convention in Madison, Wisconsin, writer Eric Flint approached me about contributing a Jani Kilian story to his new online magazine, “Jim Baen’s Universe,” which was one of the talks of the convention because 1) New Market! and 2) great pay rates.

I was so happy to be asked, as I was feeling a little out of the loop at that time. A couple of years had passed since Contact Imminent‘s release, and I was just starting to pull out of the writing drought that followed my father’s passing in late 2003. The idea of writing a shorter Jani Kilian story was one of the spurs I needed to get going again. Because short was not my natural length, I knew I would need to narrow the focus, concentrate in a single plot, and take care to not let Jani’s backstory slow down the story.

I decided to write about an event from Jani’s “lost years,” the time between her fleeing the idomeni homeworld of Shèrá and the events in Code of Conduct. She tries to lay low, yet can’t help getting involved when someone needs help.

As for the title, it’s a spin on every “incident” title you’ve ever seen as well as a take on A Small Town in Germany, the title of a novel by John Le Carré, whose Tinker, Tailor, Soldier, Spy and Smiley’s People influenced me so much. It was accompanied by a cool stylized illo by Lee Kuruganti, and appeared in the December 2006 issue.

It received some very nice reviews, and remains one of my favorite works. It will be available on Tuesday, 20 August, from Book View Café, and on Wednesday 21 August from other ebook vendors. 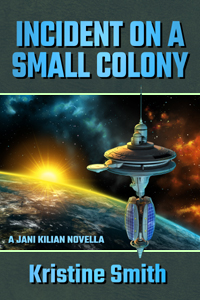 Synopsis: Jani Kilian—broke, tired, and on the run from the Commonwealth Service—hopes that a short stint working at a shipping company on an out-of-the-way colonial station will provide her some things she badly needs. Money. A place to hide. A little peace.

But all too soon, she is drawn into the staff’s habit of making the payroll by diverting cargo, and her offers to help smooth the process only feed her coworkers’ suspicions that their unusually competent documents technician is a government spy.

Then there are the hallucinations, a side effect of Service brain augmentation–Jani assumes she’s seeing things when she first encounters a young girl in the station bathroom. But not only does the child turn out to be very real, she is on the run herself and in need of serious medical treatment. As Jani is drawn into the deepening crisis, she realizes yet again that no matter how far she runs, her past is never far behind.

“The tech stuff is neat, the atmosphere tense, with vivid description and convincing detail, the action pretty much non-stop, and the emotional tension builds inexorably. Three whammies before the end, all different: the thing that makes memorable stories is not just nifty skiffy, great pacing, but the electricity between human beings. ” –“Tangent Magazine”

“The action never slows – even the one or two intentionally “quiet” moments are tense and ready to explode.” –365 Shortstories

Voted a “Notable Short Story” in 2006 by Story South