I love jam. Preserves. Butters. Jelly, not so much, but anything else in most any flavor, including the funky spicy and herbal concoctions. Blueberry-Earl Gray Tea. Strawberry-basil. Blackberry-ginger. I’ve never gone the full big-pots-of-boiling-water canning route, but I’ve made small batches that I can store in the refrigerator or freezer. 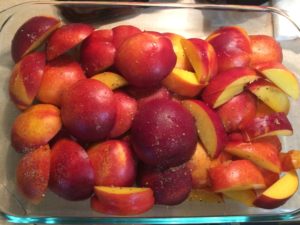 Ready to go in the oven

A few days ago, I was walking through the produce section of a local grocery big box when I decided to try and make a spread with less added sugar. Hunted through recipes on my phone, and found one for Oven-Roasted Nectarine Butter. Anything oven-roasted appeals to me, as did the fact that added sugar was an option, not a requirement. So I bought five pounds of yellow nectarines and headed home to get to work.

I sliced up the nectarines and piled them into a large glass baking dish. Broke open 10 green cardamom pods, ground the seeds, and sprinkled them over the fruit. I also added a scant half-teaspoon Kosher salt. I always add a little salt to jams and preserves–I feel it boosts the flavor and reduces the need for added sugar.

Then came the roasting–250 degrees F for as long as it took. I was a little concerned about whether the skins would remain intact or get tough, but as cooking time went on, they disintegrated. 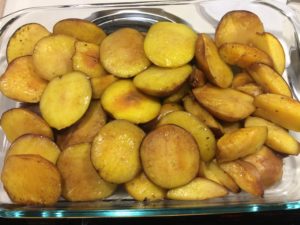 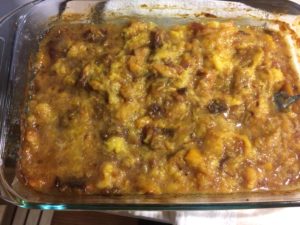 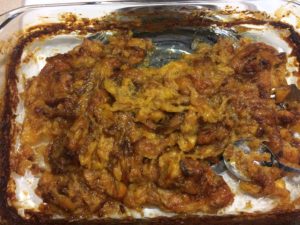 Seven hours–out of the oven 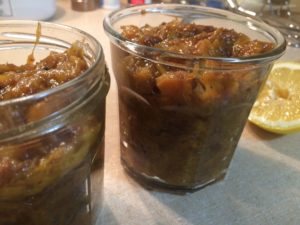 At the seven hour mark, the butter mounded on the spoon. Done! I added spices–a half-teaspoon of cinnamon, and quarter-teaspoons of ground ginger, allspice, and coriander. I also added the zest from half a large lemon and a couple tablespoons of juice to deepen the flavor and lower the pH. In the end, I wound up with maybe 3/4 of a liter of preserves.

It tasted good before I put it in the refrigerator, and it tasted even better the next morning. It was also very thick. 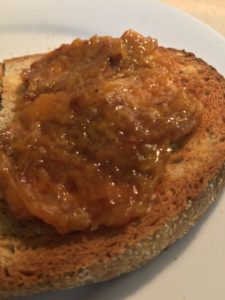 It’s not the prettiest stuff in the world, but it’s delicious.

I’ll definitely be making this again, with nectarines or other stone fruits. I will also try strawberries and mixed berry blends. And pears. I’m almost always disappointed in the flavor–or lack of flavor–of pear preserves, so I am looking forward to seeing if roasting improves matters.