I struggle with character names. The first name I think of is often the one on which I settle, even if I’m not all that enthusiastic about it, because I can’t develop a character unless they have a name. This doesn’t matter so much if it’s a minor character who’s there in one chapter and gone by the next. But too often I’ve had one-offs blossom into series regulars, and when that happens I usually wish I had taken more care in the choosing.

When I gave the name “Durian Ridgeway” to one of my antagonists in Code of Conduct,  I did not consciously realize that I had chosen to name him after an Asian fruit renowned for its stench. I am guessing that I heard the word at some point previously, and that it stuck with me because it is a pleasing collection of syllables. It also worked well with the more clipped surname and denoted—to me, anyway—an upper class background. It wasn’t until a reader mentioned how well Ridgeway’s personality aligned with the durian’s legendary stink that I looked up information about the fruit and realized I had either made one of those serendipitous backbrain connections or stumbled headlong into the trap of one person’s perfectly good name being another’s curse word/term for a body part/pejorative.

Years passed. I never heard the durian comment from any other readers, so I didn’t think about it much—when I reissued Code in 2015, it never occurred to me to change Ridgeway’s name. I was, however, mildly curious about just how unpleasant the smell of a durian actually was. I poked around a bit online, and learned that the stink is so potent that the fruit is banned on Singapore Rapid Mass Transit. It’s also chemically complex, containing fifty compounds four of which were previously unknown. In addition:

Even apart from the smell, durians are a scientific marvel. According to a 2009 Japanese study, durian extract strongly inhibits the enzyme aldehyde dehydrogenase (ALDH), used by the liver to break down alcohol. This might account for a piece of traditional Asian folklore: that getting intoxicated while eating durians can lead to death.

Earlier this month, as I steered my grocery cart down the Asian Foods aisle of the local warehouse grocery store, what to my wandering eye should appear but a durian fruit, safely confined within a refrigerator. It was huge, a deflated basketball covered with spikes. 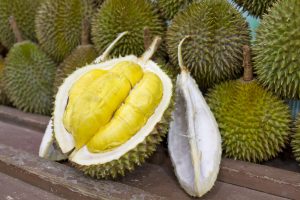 Durian (not the one in the fridge) Photo: davidgn @depositphoto.com

I did not open the refrigerator to explore further, but continued on my way, only to spot these in the cookie and cracker section: 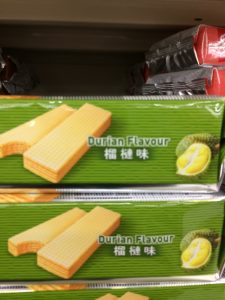 This, I decided, was an opportunity to evaluate a muted version of the infamous fruit. Stinkbomb Lite. I hunted around on my phone, and found mentions of savory/sweet, garlic and fruit flavors, and decided I could take the chance.

When I got to my car, I opened the package and sniffed. Definitely detected garlic. The faintest hint of burnt rubber. A mustiness that didn’t jibe with the concept of a sweet wafer. I took a deep breath, intoned “Research,” and took a bite.

Yup, garlic, along with a bit of blue cheese and a hint of sweetness. After a minute or so, the garlic and odd savory undertones bloomed a little more. Not unpleasant, but not a flavor that would make me jump up and down and yell “Yum!” I would consider serving these things with a stronger cheese like blue or Gorgonzola. I would also keep the Altoids handy because the garlic tends to hang around.

In closing, if I had a chance to do it over, I would still probably keep Durian Ridgeway’s name as is. It really is appropriate. But next time an interesting collection of syllables pings my brain and whispers ‘wouldn’t I make the best name,’ I will look it up first.