I volunteered to make one of the desserts for the Thanksgiving get-together at a friend’s house. So of course, I decided to make something I had never made before, and to make some changes to the recipe as I went along.

A few weeks before, I had stumbled into a short Twitter discussion about Mexican hot chocolate and other combinations of chocolate with spices. I am pro-spiced chocolate in bar form, and Food Network chef Aarón Sánchez has a Mexican brownie recipe containing cinnamon and cayenne pepper that’s a favorite. I hunted around some more–it didn’t take me long to find a holiday dessert that would allow me some room to experiment: Crème Brûlée Brownies. I’d never before made crème brûlée but had made other thickened sauces, and the brownie portion was similar enough in volume and ingredients to the Mexican brownies that I figured I could get away with the same amounts of spice. I didn’t want the heat to overwhelm the other flavors, but I did want it to come through. 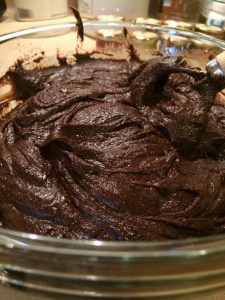 I tweaked as I went along. I’d been replacing all-purpose flour in recipes with either white whole wheat or whole wheat pastry flour for years—they’re not as heavy or nutty-tasting as regular whole wheat flour, but they do impart some substance. They also seem to soak up more liquid than all-purpose, which means the batter was likely thicker than it would’ve been if I’d used all-purpose. I also added a little extra salt for overall flavor improvement, and a couple of teaspoons of espresso powder to boost the chocolate.

Then came the heat and spice. I started with the amounts in the Mexican brownie recipe, 1 teaspoon cinnamon and ¼ teaspoon cayenne powder. But I couldn’t detect any heat when I tasted the batter, so I doubled the amounts.

The recipe called for 20 minutes baking time. Um, no. I didn’t have a 9×13 baking pan, so I used a roasting pan with thicker sides and bottom—after 20 minutes, the center of the brownies was still liquid. So I kept them in the oven, and checked them every five minutes. It wound up taking 35 minutes for them to bake. 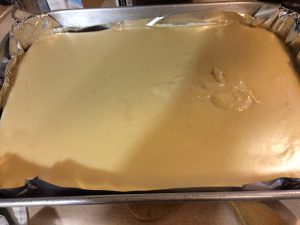 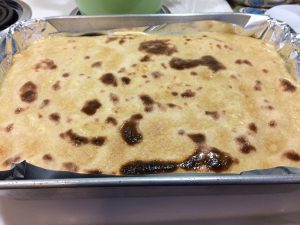 After the brownies were done, I moved on to the crème brûlée. I added smaller amounts of cinnamon and cayenne, then stirred stirred stirred until it thickened. It smelled so good, that rich vanilla aroma. I poured the crème over the still-warm brownies, then sprinkled sugar over the top and set them under the broiler. I had to pull them out before the sugar turned golden brown and crusty, however, as some spots turned dark brown and I didn’t want them to burn. Next time, I’ll use a kitchen torch.

Anyway, the result? Good brownies. Not as bittersweet as I prefer, but very moist and rich, with just a hint of heat from the cayenne. The crème brûlée topping was delicious; it would make a good dessert all by itself. Next time, I’ll use a different brownie recipe. I’d also like to experiment with the crème brûlée itself by adding chocolate and other flavorings. 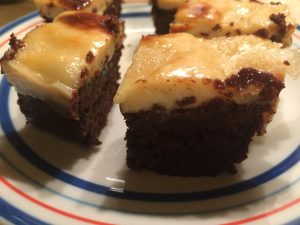