We’re getting a short break from a heat wave here in NE Illinois. Temps have been in the high 80s/low 90s, with gusty winds and threat of thunderstorms. Today, low 70s–at least close to the lake–and while the sun is warm, it’s cool in the shade. A good day for healing bonsai.

If you don’t know what I’m referring to, check out this post for background. Condensed version–I was given a ficus bonsai back in 2003, had so traumatized it over the years that I finally decided to learn how to take care of it, and therefore enrolled in a 6-week course at the Chicago Botanic Garden.

Right after that first post went live over at BookView Café, my tree got wired. In bonsai, that’s a good thing. My instructor did the bulk of the wiring, while I wrapped a couple of the branches under his direction. The purpose of the wiring is to support the branches as they are moved into the desired positions; as the branches grow, the wire is removed so that it doesn’t cut into the wood. The goal is to mimic the development of the tree as it interacts with its environment: the tree growing tall and straight, or crookedly through a crack in a rock or on a hillside, or in the midst of a forest.

The standard forms that bonsai can be trained to take are described here. From what I can tell, my ficus started out as a informal upright or a slanting, but that’s a guess at this point. The mess of thin branches that developed over the last few years are the result of poor care as well as simple growth after the loss of the old primary limbs. The large leaves clustered at the ends of the branches were trying to pull in as much sunlight as possible, while the lack of inner branches and leaves was due to the fact that the tree simply didn’t have the strength to develop them. The answers were: watering as needed instead of once a week, trimming larger leaves to encourage foliage growth and back-budding (growth farther down the branches), weekly feeding with a food that promotes foliage growth, and careful reintroduction to outdoor life to avoid sunburnt leaves. 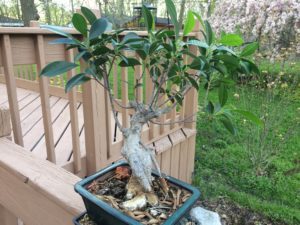 My ficus before wiring 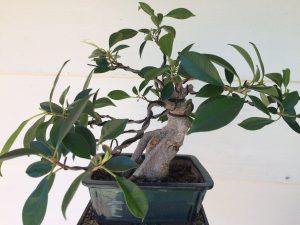 After I brought the tree home, I left it out on the deck, moved it from the sun to the shade as the afternoon wore on and the sunlight became too intense, and watered it daily. Trimmed a few more of the larger leaves. So far, it’s had two fertilizer feedings. The results are promising. 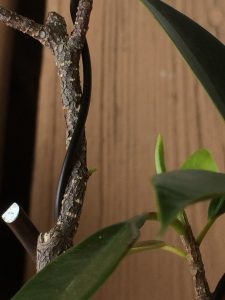 We have backbuds! You can barely see the one in the photo–it’s on the right side of the left branch, in the middle/opposite the overhand curve of the wire. I’ve spotted several more on other branches, and I’m thrilled. 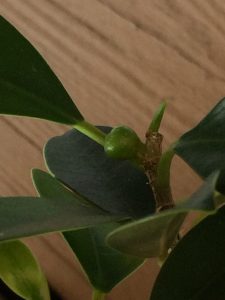 It’s a fruit! Possible this tree is a small-leaved fig.

Also, fruit! I am pretty sure that this is the first time this tree has ever fruited. It’s not a classic fig tree–there are about 90 gazillion varieties of ficus, and the classic fig is one of them–but it may be a small-leaved fig (ficus obliqua) judging from the shape of the leaves and size/location of the fruit. They’re natives of Australia and surrounding islands, and when left to their own devices tend to get whacking huge. Funny that they’re also good for development into bonsai.

Well, that’s all for now. The tree may be repotted this year, but it’s also possible that I will let it settle into the wiring and the new feeding regimen and hold off doing anything major until next year. In bonsai, you think in years. It’s definitely not a hobby for the impatient.