I don’t often spend Sunday mornings in the living room, laptop in lap. But it’s pouring, so the usual morning walk has been postponed until the rain stops. Breakfast has been had, and I’m debating a second cup of coffee. Gaby is dozing at the far end of the couch.

Anyway, it has been a while. Most of February and March was taken up with finding a new webhost and getting my site moved, including weeks-long delays during which the company I had initially chosen AND PAID UPFRONT TO MOVE MY SITE AS WELL AS FOR THREE YEARS’ WORTH OF HOSTING did pretty much nothing. So after I returned from a trip out West earlier this month, I sorted things out with the help of April, my inestimable PA, canceled deal with No Go Slow Host, moved to a different host, and got settled. Still one or two bugs to be worked out, but I have email and I can post and my website still works.

I haven’t been totally offline during that time. I have posted over at BookView Café about the art I found while wandering SeaTac Int’l Airport way too early in the morning and favorite revenge films. Daily trials and tribulations show up over on Facebook (links above and on the right-side links widgets). Twitter is proving a timesink, albeit an educational one.

I also went on a 5-day writers retreat, which was why I wound up roaming SeaTac Int’l’s Concourse A during the small hours. It took place in Quinault, Washington, on the shores of Lake Quinault. This was the first time I visited the Olympic Peninsula and the Rainforest National Park, and I was looking forward to it. 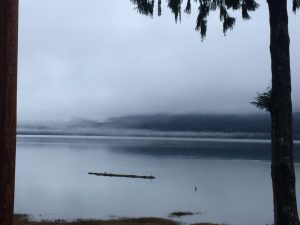 Most of the mornings were misty, as it rained most every day (early March on the Olympic Peninsula–go figure). But that made for good writing weather–I didn’t hit a high word count, but I did work through a rough chapter that had fought me for a while. So, when Saturday morning dawned sunny, I felt quite justified in taking a hike around the nearby woods. 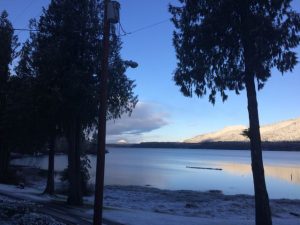 The lake on a sunny morning 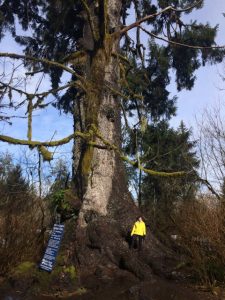 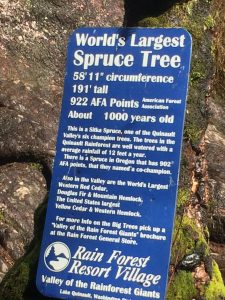 Just a short walk from the compound stands the World’s Largest Spruce Tree, which is even more impressive when you’re stumbling over its roots trying to get your footing so you can have your photo taken. There are a number of record-setting trees in the area, but the spruce is the one within easy walking distance. If I go back next year–and I want to go back–I’l try to build in extra time to see the others. 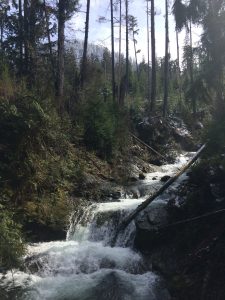 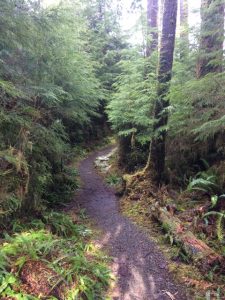 Along the Gatton Falls trail

I then hiked a mile or so until I arrived at Gatton Falls. The trail is narrow and twisty, with ferns, moss, and evergreens close on both sides. I really liked it.

The retreat ended too soon, and then I was back home dealing with website migration, taxes, and life in general. But I have been working–hope to post snippets of both jani Kilian and Lauren Reardon wips over the next few weeks.