So, I arrived home midafternoon last Monday with plans to post all about the convention from Day 1. Then dawned that realization that the scratchy throat I had attributed to allergies was actually a post-con cold come early. Over the next few days, I went from achy/sneezy/cranky/exhausted to “please don’t let this be like the cold I caught at C2E2” to, finally, head fulla sludge but overall okay. I then spent the next several days catching up on all the house and business things that didn’t get done while I was sick.

Which is why I haven’t posted about the con yet.

Later on, as I pulled details together, I realized that a day-by-day description is best posted day-by-day. Too many details getting lost in the mix.  So, highlights. I decided to stick with highlights.

After Jay Lake won the Best New Writer Campbell in 2004, he decided that award winners should receive something else along with the “cheese board,” and that all nominees deserved something to commemorate their nominations. Now I am working from memory and wasn’t one of the principles, so I may be getting things out of order, but as I recall he started working with a Portland designer to craft a pin, but became ill before all the details could be finalized.

But other folks had taken charge of matters. Fast-forward to this past ConFusion, when John Scalzi asked if I was going to be at Worldcon. Because pins were being distributed and mine was on the list.

Fast-forward once more to Worldcon, Saturday, the Dealers Room. As I helped at the BookView Café table, a gentleman arrived bearing a small box bearing the label Springtime Creations, which he presented to me. I opened it, and lo, a star shone forth! Just like the star on the Campbell Wikipedia page! I stuck it to my badge, where it stayed for the rest of the con. Now it rests in the official convention jewelry bag. 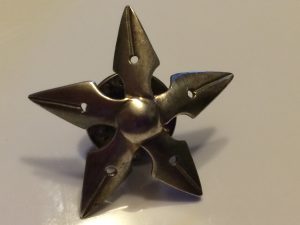 I missed out on the Campbell tiara, but I’m very glad to have received the pin. Thanks, John.

Speaking of the BookView Café table, here it is: 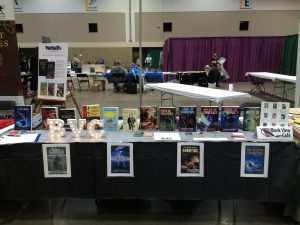 The BVC table at Creators Alley

Many thanks to Dave Smeds, Leah Cutter, and her husband Blaze Ward for helping out. Folks stopped by, and we talked about books. It was a good experience, and lessons were learned that can be applied to future displays.

Art. I ran into Scott Zrubek at the Art Show, and he made it a point to show me Vincent Villafranca’s display. It was pretty amazing–the skeletal rider on horseback took my breath away. I have no more space on my walls for any more paintings, but I did decide I could find room on a shelf for one of Villafranca’s Hugo-nauts, and made a bid. I didn’t have time to follow up, though, and felt pretty sure that I would lose out. But Sunday morning rolled around, and I took a short break from my stint at the SFWA table and checked the bid sheets and hey! 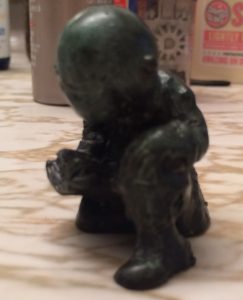 Panels went well. Science Fiction That Inspired Scientists was a challenge because it was my first time moderating a Worldcon panel. But I prepped questions ahead of time–what SF first inspired you? What tech or project would you love to work on now?–and things moved along. Great panelists, and a fun experience. My last panel of the con, A.K.A Why a Pen Name? was sort of funny because there was a room change that didn’t get communicated. So Toni Kelner and I met in the new room, while Teddy Harvia held a one-person panel in the old one.

I wonder if we talked about the same things at the same time? Spooky panel action at a distance.

I think this was my favorite Worldcon. Low-key, but busy. Saw lots of old friends and acquaintances, and made new ones. Ate KC BBQ. Stayed in a cool hotel, the Hotel Phillips, an Art Deco place built in 1931. I wish it hadn’t been undergoing renovations at the time–the restaurant was closed, and there were no good spots to meet friends. But what I could see of the place, I liked. I’d like to visit again after all the work is done. 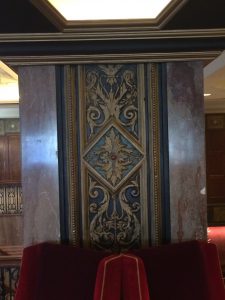 detail from one of the marble columns 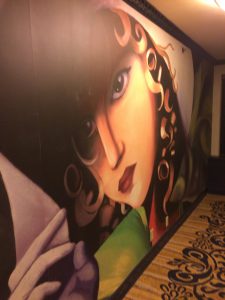 the mural on my floor 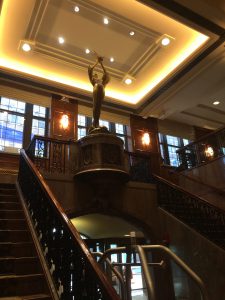 looking up toward the mezzanine