Two trips in one week is a little much. Not that Park City wasn’t interesting, and Wiscon is always good.

But it will be good to stay put for a while.

Panels went well. Learned some things during Bowie’s Influence on SF, because that’s what happens when you stop following an artist for a stretch of time (I didn’t listen to much Bowie in the late 80s/90s). I also learned some stuff during the Writing Tools panel, which was moderated by K. Tempest Bradford. Smartpens with both audio and sensory (ability to ‘record’ handwriting strokes) capabilities–I knew vaguely that they existed, but didn’t realize how far the tech had come. That said, the love of fountain pens remains strong across age groups, and they’re not all expensive Mont Blancs and Watermans. Disposables are available. Antique stores are a good source. There is also a brand called Platinum Preppy which makes pens priced at $4-$5.

Tempest recorded the panel for a future podcast. I will link to it when it becomes available.

One of the best parts of Wiscon is Madison itself. The weather cooperated–there was a little rain, but not enough to impede restaurant crawls or interfere with the Farmers Market. I decided to brave container gardening this year, and bought a black cherry tomato plant and some mixed basils. Also bread, cheeses, spring spinach, and something called wasabi arugula which is DAMN. Bitey. Very bitey. Had some for dinner with goat cheese, pine nuts, and balsamic vinegar dressing.

A few photos. The view from my hotel room window: 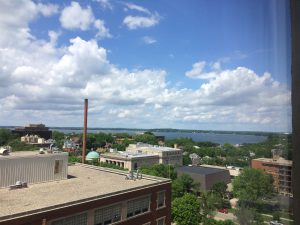 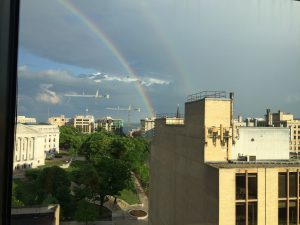 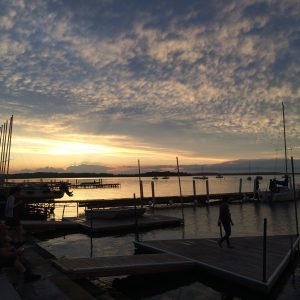