A week ago at this time, I was eating a really good steak dinner at the VooDoo Restaurant at the Rio, after having signed a whole lotta copies of GIDEON at the Avon Reader Party.

It was my first RT, and boy, was I busy. A couple of Avon events. A couple of Club RTs. The Giant Book Fair. Some really good business panels, including an audiobooks overview featuring a numbers of producers and narrators and a “Buzz Your Book” discussion led by MJ Rose. Meals with friends. A lot of walking. Logged over 4 miles most days just bouncing back and forth from my room to the convention area of the hotel. Battled “hotel head” thanks to the dry, recycled air and cigarette smoke from the casino.

I arrived last Monday night, checked into the Rio, and crashed. Tuesday was Tour Day, the all-day trip to the Hoover Dam and the West Rim of the Grand Canyon. I had to be outside by 630am to meet the tour bus, and given how spread out this hotel is and the various definitions of “lobby” depending on whether you’re headed to the airport, leaving by car, or getting on a tour bus…different locations scattered all over the site, and of course the tour bus meeting place was the farthest away and the clock it was ticking…

…but of course I made it because this would be a much shorter post if I hadn’t.

The tour was good. 10 hours long, of which 7 were spent sitting in the bus. Lots of Mojave Desert scenery, including the odd cluster of brilliant pink cactus flowers. Joshua tree forests.

Our first stop was Lake Mead and the Hoover Dam. The dam looked smaller than I thought it would–isn’t that a kid thing to say? The scary bit is that the white line marks the old high water mark of the lake. It’s been over 20 years since it’s reached that level. 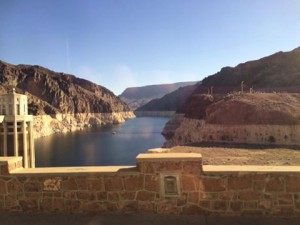 After the dam came a few more hours of driving. From Nevada into Arizona, and the West Rim park. Unlike the other Grand Canyon Parks, the West Rim is controlled not my the US Park Service but by the Hualapai Nation. There are three sites, the Hualapai Ranch, Eagle Point, and Guano Point. The Ranch featured mock-ups of ranch and town buildings and was a little too theme park for my taste, so I hitched a shuttle to Eagle Point, where the Sky Walk was located. I wasn’t planning on going out onto the Walk, but then I figured that odds were that I would never return to this particular park, so it was now or never.

You’re not allowed to take photos out on the Sky Walk–only the tribal photographers are. You stick your stuff in a locker, then don the paper booties to keep your shoes from scratching the clear surface of the walkway. If you don’t want your photo taken, you can walk along the Sky Walk as long as you want. If you want photos, you wait at the entry until a photographer is free, then out you go.

The photo below shows Eagle Point, a rock formation that resembles an eagle with outstretched wings. It’s about an arm’s length from my fingertips, the first V-shaped depression in the line of rock formations. It’s hard to find at first, but once you see it, you can’t unsee it. 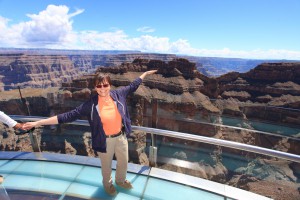 Eagle Point–you can see the eagle with outstretched wings in the right 1/3 of the photo.

It’s funny, because I was okay until the photographer led me out onto the Sky Walk. At the point, I could follow her directions, but I couldn’t look down. Ol’ lizard brain kept sending signals to the rest of me that I was walking on air and in imminent danger of demise. 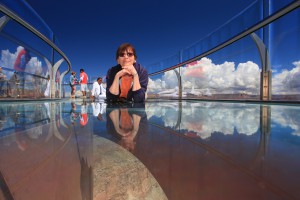 And finally, because we’re all about the quiet dignity: 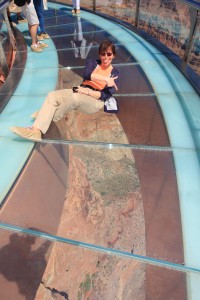 calm, cool, and collected as always

After Eagle Point came Guano Point, which is indeed named after bat droppings. A vast amount of said droppings were found in a cave in the 1930’s, and were mined for use as fertilizer from 1957 until 1960. Cable cars were used to transport miners and guano across the canyon–the remains of the old cable head house are still in place. 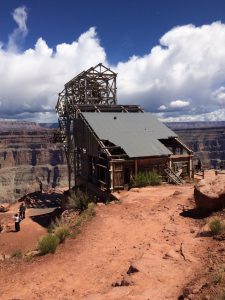 I have to photograph the flowers. 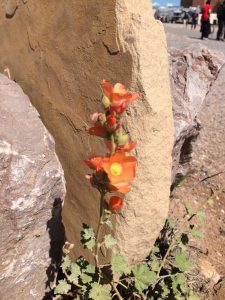 A view of the Colorado River: 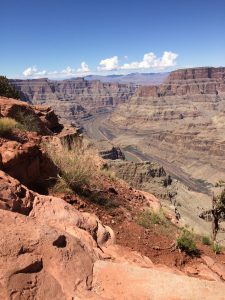 A slow-moving section of the Colorado River 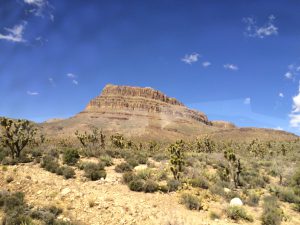 Another view of Hoover Dam: 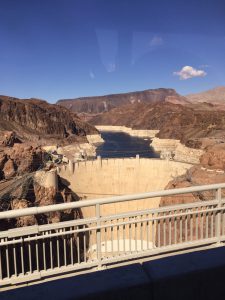 Hoover Dam, from the highway

Back to Las Vegas: 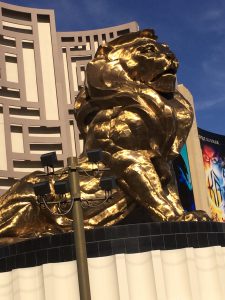 And this post has gone on long enough. It was a tiring but good tour, and I’m glad I took all these photos.