Blueberry Earl Grey, to be exact. 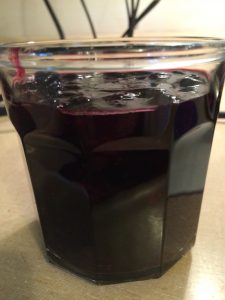 Used this recipe. Wondered why I couldn’t use fresh-squeezed lemon juice, so googled. The issue is apparently the need for sufficient acidification. But according to this article, lemons that one finds in a typical US grocery store are sufficiently acidic for use in all canning EXCEPT FOR MEYER LEMONS, WHICH ARE NOT. So, I guess I could have used fresh lemon juice. Since I wasn’t planning on giving any of the jam away, I would be the only person at risk of nastiness. Given that jam doesn’t last long around me, it probably doesn’t matter what I use.

Mistakes were made. I have never used pectin as a setting agent in jam before, so I simply noted Sure-Jell on my grocery list. Went to the store yesterday, and found that there were three different types: regular, less-or-no sugar added recipes, and All Natural. Of course, I picked the All Natural, which proved to be the wrong type; I should’ve bought the less/no sugar added. But I had already put the berries on the stove to cook, so I figured Hell with it and went ahead.

Oh, I also found that I had bought decaf Earl Grey instead of regular.

BE THAT AS IT MAY, I made the jam. I jarred the jam. See above photo. It’s in the fridge now, still slightly warm. However, it does appear to be setting. It may remain a little runnier than desirable–I’ll know more in 12-24 hours–but I shall endeavor to cope. It does taste good–nice berriness with strong hints of Earl Greyness. I think it’s a keeper recipe. I usually eat jam on toast, but I bet this stuff would rock on pancakes.

In other news, still dealing with tailing ends of Cold From Hell + Las Vegas Relapse. Got a tentative schedule for Wiscon, which looks like it will be fun–will post when it’s finalized. Wishing the weather here in far NE Illinois would warm up.

Oh, and the other day, this happened over on the Twitter: 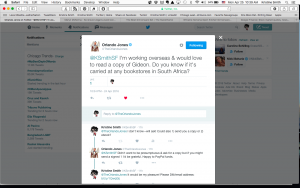 So yesterday, I mailed off a book.