I know. It’s been a while. I’ve been saying that a lot lately.

I plead The Busy. Prepping CODE OF CONDUCT files for release. The ebook is available for pre-order over on Amazon (and now Kobo too), and, barring technical difficulties, should pop up in other ebook stores–iBooks, Nook–over the next few days. Working on a trade paper edition, which may not make the 1 December release date but should be available soon after. Also working on interview questions for my BookView Café launch. Plotting a Jani novella, which I thought would prove relatively simple at first. But plot has grown Complex, with much backstory that needs to be carefully interwoven so that folks who’ve read the novels don’t get bored and those new to the world don’t get lost.

I also have Alex Gordon work to do, namely proposals for future books. Copyedits for JERICHO, the next book in the GIDEON series, should turn up in a couple of weeks. And as I’ve mentioned before, maintaining two separate online identities is difficult and at this point no longer necessary. So I will be working with wiser webheads than I to combine my two sites into one.

Also too, newsletter. Working on getting that started, too. It will be a combo of Kristine Smith and Alex Gordon news and updates, with links to interesting articles and research, background about the books, snippets, and, hopefully, contests for ARCs and other neat stuff. IOW, there will be good reasons to sign up. But I want it to be solid as possible from the start, which means I don’t just want to toss a sign-up widget up there. As soon as something is ready to go, I will post.

Not sure if I will be posting again before US Thanksgiving. If not, here’s my version of a Happy Thanksgiving e-card. Gaby, kitted out in a holiday neckerchief. Safe and happy holiday, to all who celebrate. 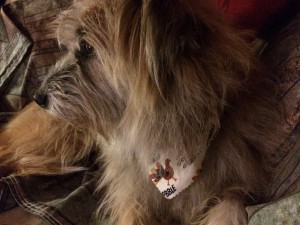 Gaby, decked out for the day