Sometimes they work out.

I was excavating the baking section of the cupboard–checking dates on flour and whatnot–when I came upon a box of corn muffin mix that was a little past its Best By date. By over two years. May 2013, to be exact.

I debated simply dumping it. But I had most of a can of cream corn leftover from dinner, and decided to experiment. I made the mix using the cream corn instead of milk, then added the required egg along with a tsp of dried dill and a tsp of “Southwest Seasoning,” which is a combo of various peppers and herbs. Spooned the mess into muffin cups, and baked for about 35 minutes (instead of the recommended 18-20 if I had followed the recipe).

I knew things weren’t quite working out as hoped when the muffins failed to rise. I had filled the cups about halfway, and halfway was pretty much where the muffins stayed. However, they smelled lovely–think ‘buttery tortilla chips.’ I took them out of the oven after the tops turned a bit more than golden brown, and tried one with butter after it had cooled.

Verdict? Still very moist inside thanks to the corn. Think corn hockey pucks. But they’re tasty–I just had one that I had stuck under the broiler and topped with smoked white cheddar, and it was great. Hint of dill. Hint of heat. They’d be great with chili or bean soup, anything spicy/tomato-based.

If I had it to do over, I would have added about half the specified amount of milk, some shredded cheddar, and some baking powder or baking soda. I know the stuff loses its punch over time, and that might have happened with this mix. 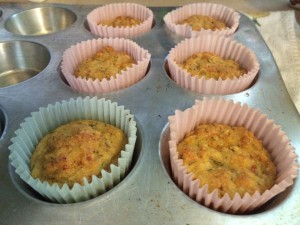 In other news, Alex Gordon is still getting the bulk of the attention these days. The release date for JERICHO has been pushed out to April 2016, which allowed me more time for revisions. Ain’t ever gonna turn down more time. That’s not in my DNA.

That said, there may be Kristine Smith news in the coming months, and that’s all I can say now.