It’s going to be a few weeks before my alter ego has to get to work on JERICHO revisions, but I went ahead and made a batch of revision cookies anyway. I like to have food squirreled away in preparation for the long march to –30–: soups, burgers of various types, maybe a meatloaf. Chicken breasts and portions of fish. And home-baked cookies. I’ve tried making do with packaged cookies, and they’re not the same–I don’t feel like I’m having an end-of-the-day treat when I have one of those. There are some bakery cookies that I love, especially the whole grain-dried cranberry and cowboy cookies from Whole Paycheck. But in that case, I need to make a choice between a month’s supply of cookies and paying the mortgage, and if I don’t keep up with the mortgage, I won’t have a place to write. So, I bake my own cookies.

Ina Garten has a couple of cookie recipes that have become standbys, namely her Oatmeal Raisin Pecan and her Ultimate Ginger. I had a boatload of old-fashioned oats, and I love oatmeal cookies, so I opted for the Oatmeal Raisin Pecan…with a few changes.

Verdict? The flour and wheat germ worked great–the cookies are moist and have a little chew, which is how I like them. I don’t like really chewy, soft cookies. The cherries are good, but a little on the sweet side. Next time I will use raisins or good dried cranberries. As for the chai spice, it added nice depth. I might back off to a tablespoon or a tablespoon and a half next time, though, because it is strong. I will see if the flavor mellows over the next few days. 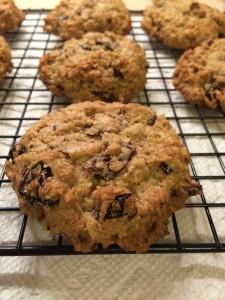