Over on Facebook, Lynn Flewelling posted a link to an article about how pre-soaking beans prior to cooking was unnecessary. I perked up when I read it because I love bean soups and stews, but never made them because of the soaking step. Slow overnight soak or fast one-hour boil and soak? If you don’t do it right, you’ll wind up with bullets. It didn’t help that the one time I presoaked navy beans for baked beans, they came out hard and gritty. I just didn’t think I’d have success if I tried again.

But this article gave me hope, so. I found the recipe for black bean stew and set about chopping the onion because I knew I had a pound bag of black beans in the pantry. Except that when I looked, I found I didn’t. I did have a pound of navy beans. A year-old pound of navy beans–I remembered the day I bought them at Whole Paycheck, the good little organic shopper shoveling her beans into a bag…then sticking them on a shelf and forgetting about them. I knew beans aged and got tough over time, but I figured that all I risked was half an onion and some time. It was either try to cook the beans or use them as crust ballast for blind baking…except that I already had a couple of pounds of dried beans set aside for that purpose, yet more navy and pinto beans that I bought with every intention of cooking and never did.

Anyway, along with the onion, garlic, and chopped dried chile pepper, I added a teaspoon of ajwain (an Indian seed that flavors and also mitigates that issue with beans that we all sang about in second grade**), some herbs de provence, diced sun-dried tomatoes, celery seed. I didn’t add bay leaf because I didn’t have any, hence the other stuff. 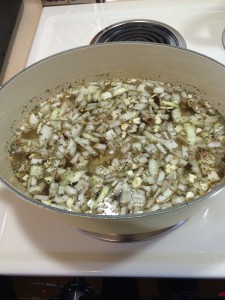 Heated until it just started to simmer, then covered it and stuck it in a 325F oven. I figured that navy beans might take longer to cook than black beans, and I was right. I let them cook for close to two hours before adding the salt, checking them all the while–yes, they were absorbing liquid. Yes, they were getting softer: 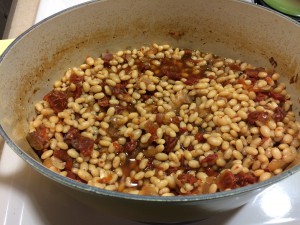 After about three hours, I made tuna fish for dinner because I realized that the beans wouldn’t be done in time. Besides, anything stew benefits from sitting overnight, and I figured this would be the case with this stuff as well. I added salt and pepper–about 2 tsps salt instead of the single one called for in the recipe. Stirred and stuck it back in the oven.

At the three-three-and-a-half hour mark–the beans were still intact but creamy when chewed–I zapped the stew with the immersion blender and creamed maybe 1/3 of them. 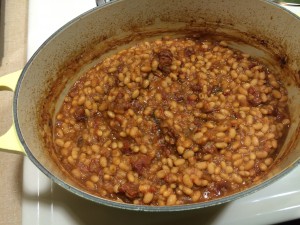 I also added a large squirt of ketchup because I always add ketchup to navy bean soup, and a tablespoon of vegetable demiglace because frankly I still found things a little flat. Then I let it cool and stuck it in the fridge overnight.

Today, I added a can of Ro-Tel diced tomatoes and a little more salt. It is a very thick stew–if you wanted something more soupy, you could add stock or more diced tomatoes or water. I like it thick, so I heated some up in the microwave, stuck some cheddar cheese on top, and had it with a toasted roll. 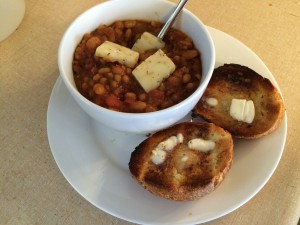 It’s good. Yes, the beans have more flavor than canned or–from what I recall–presoaked. I was also struck by how well they remained intact even though they were very tender. Not mushy at all. Or gritty.

I bought black beans today, as well as lentils and white beans. Looking forward to making more no-soak bean dishes. They will need to cook longer, so I will have to be careful which recipes I try.