It’s been almost a week since King passed. Time goes so quickly.

I was picking through photographs, and found my favorite picture of him. Dad was still alive, which means it was taken in Fall 2001 or 2002, which in turn means that King was either 8 months or a year and a half old. He was bounding around the backyard as Dad and I raked leaves. I was toting the camera in hopes of getting a good photo, and took a short break just as King decided to check out the pile I had just raked. He sniffed the leaves, then plopped down in the middle of them and stayed there as they filled in around him. 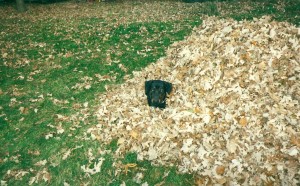 Gaby seems fine–she’s eating, playful. Earlier in the week, she would hesitate and look around when I offered her a treat. It seemed to me that maybe she was wondering where King was. She doesn’t appear to be moping or quiet. I took her for a walk this morning, and she was so excited–nose to the ground the entire time…except when she spotted the deer. She really wanted to give chase.

Taking her to the boarding kennel for her temperament check tomorrow. She will be there for a good chunk of the day, which means I will be Solo Kris for the first time in months. I have plenty to do–errands, grocery shopping. The usual chores. But it’s going to feel weird.

I hope things go well. I would really like her to have the chance to play with other dogs every so often.