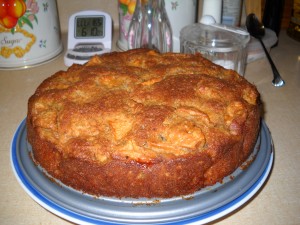 I made one for the first time around Thanksgiving. Liked it. Decided to make one today, but couldn’t find the recipe. Searched, found this one, and thought it looked good.

Adjustments. Decisions. I did have a springform pan, but it was a 9-inch. It was coated stainless, and the instructions recommended setting baking temps 25 degrees F lower than the temp in the recipe. It also had a different construction, that was supposed to be leakproof. However, the recipe recommended setting the filled pan atop a parchment paper-lined cookie sheet to catch leaks. I did that, even though I greased the pan with Pam instead of butter and didn’t really expect leaks.

Additions: I substituted 1/4 cup of the all-purpose flour with white whole-wheat. 1/4 tsp salt. The apples I had were a bit mealy and kinda flat, so I added a tablespoon of boiled cider to boost the apple taste. Couldn’t make something apple w/o spices, so. 1 tsp cinnamon, 1/2 tsp ground cloves, a few scrapes of whole nutmeg, maybe 1/4 tsp. About 1/2 tsp grains of paradise. A 1/4 cup or so crystallized ginger chips. 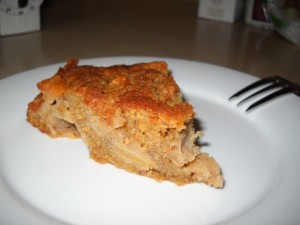 The cake baked for about 1 hour 20 minutes. It did pull away from the pan, and the top and sides were dark brown. But the consistency is odd, dense but light, a little custardy. It’s good enough that I will make it again, though surprisingly mild-tasting given all the stuff I added. I will not set it on the cookie sheet again, as the springform pan did not leak a bit. I think the cake would have come out a little more baked if there hadn’t been that layer of insulation between the pan and the heat source.