I used to collect a variety of china figurines, mostly by Lenox. I have most of the princesses, a set of “fashion through the ages,” and enough birds to stock the Atlantic Flyway. But, as sometimes happens, my tastes have changed. Once I have some time, I will try to find new homes for most everything, probably via Goodwill or another charitable shop.

But one thing I will never give up is the set of Christmas ornaments that Lenox issued over 20 years ago. A set of 24 carousel animals, horses for the most part. But there’s also a frog, an elephant, a giraffe, a rabbit, a St Bernard, a cat, and a few other unusual critters. I hadn’t used them in years, but given that I went with a real tree this year, I felt they needed an airing. I had to take care hanging them as they’re china and somewhat heavy–the tree is a Scotch pine and not all the branches can support the weight.

I scattered them about, mostly on the front of the tree so I can see them. I tried to take some moody, dimly-lit photos, but the Coolpix decided that it had a flash and dammit, it was going to use it. So, some of the photos are a tad bright, but they do allow you to see the detail of the things.

They have an old-fashioned feel to them, like they belong on a Victorian tree. 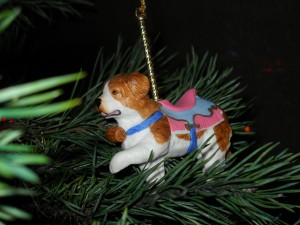 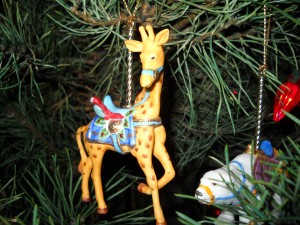 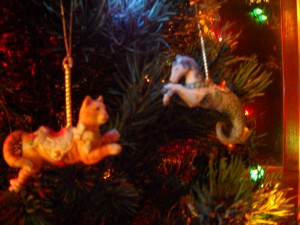