Ultimate Ginger Cookies with rum-soaked ginger have been baked. I had used straight rum in the past to moisten this dough, which can prove crumbly and hard-to-work at times**, but hadn’t thought of soaking the crystallized ginger itself. Lisa Mantchev gave me the idea–she used bourbon as the soaking medium, but I decided to stick with dark rum because 1) it seemed to go with spice and ginger and 2) it’s what I had in the cupboard.

I didn’t measure. A few days ago, I made a 50/50 mix of soft diced ginger and hard crystallized ginger chips (both from King Arthur) and filled a 500ml glass container about 2/3 full. Added enough dark rum to cover the stuff, then snapped on the lid and let it sit on the kitchen counter until this evening.

Like Lisa, I used about a half cup of the tipsy ginger in the cookie recipe. I didn’t drain it well, just removed it from the container with a slotted spoon and waited until the rum stopped streamimg. Dumped it in the mixer. As the dough still seemed a little dry, I added gingery rum by the teaspoon until it held together better. Four teaspoons altogether. It doesn’t take much liquid to make a world of difference with this dough.

Note: I added more Kosher salt than the recipe called for, a half-teaspoon rather than a quarter-teaspoon. I love Ina Garten’s recipes, but I tend to think that she oversalts savory dishes and undersalts baked goods. I just think a little extra salt boosts all the other flavors.

I also added another extra ingredient–a teaspoon of grains of paradise, a pepper-like spice. I first heard of it on the apple pie episode of Good Eats. Alton Brown added a teaspoon to the pie filling, and I figured an equivalent amount would be the place to start with the cookies.

Results below. Yes, the cookies are different colors. The darker, less crackly ones baked on the lower shelf, closer to the heat source. 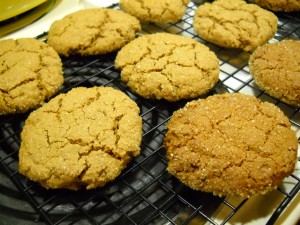 I usually try to let the cookies sit overnight before eating–spice cookies benefit from being allowed to age for a bit. But I was anxious, so I tried a small one while it was still warm. Very soft, thanks to the ginger soakage and the extra rum. Very full-flavored. I’m not sure if I was supposed to detect an alcohol kick or not–I didn’t. I did think that all the spice flavors were enhanced, but that the ginger blended with the other spices instead of popping to the fore. Part of the ensemble cast rather than the featured player.

I plan to try bourbon at some point, but I do recommend the rum. Brandy might work. Also wondering if a little brandied orange peel would be a good addition.

**It doesn’t help that I switch out 1 cup of all-purpose flour for white whole-wheat flour. The white w/w soaks up liquid more than the all-purpose.