It’s chilly, dammit. 50s. Sunny, but still. We had about half an inch of rain last night–I am so glad I bought that rain gauge–to add to the inch, inch and a half we have received over the past week or so.

Thanks to the rain and temperature moderation, the tomatoes are revitalized. The Black Cherry is officially nuts, and the other plants are putting out buds and new fruit all over the place. They look the way they should have back in July.

Even the basil look lively. I may get a batch of pesto out of them after all.

70s and 80s predicted through the week, but. Winter is coming. In past years, the tomatoes had given up the ghost around this time thanks to chill and blight. Currently, fingers crossed, while I am seeing some leaf die-off, I’m not seeing evidence of blight. A warmer than usual fall was predicted last I checked, so maybe fresh tomatoes in October are a possibility. If not, I may need to dig through recipes and give a green tomato jam or relish another try.

Late last summer, I bought some lovely “Mona Lavender” hanging baskets from a nearby big box. They bloomed through the fall, and were so pretty that when winter came, I decided to try to keep them going. I nursed them indoors, and even though the house was chilly and the light poor, they muddled through.

When spring arrived, I put them outside, and waited for flowers. And waited. Yes, I should have actually read the article that stated that shortened days trigger flowering, but I had no experience with this variety and thought I would at least see buds by midsummer.

Nope. Shortened days were the key. I returned from Chicon to find all three budding and flowering like mad. I am thinking of transferring them to larger pots, which would mean of course that I will need to find a place in the house for them to winter.

Below is a photo of one of the plants. They do well in shade, and I really wish I could put them in the ground on the shady east side of the house. Problem is, they don’t handle cold well. That makes wintering over a problem as the plants took up a fair amount of space in the dining room and shed leaves all winter thanks to the dryness and lack of sun. I guess I could move them into the basement with a grow light. 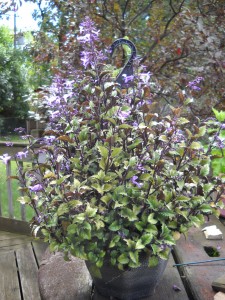 In other news, there’s one cool thing from Chicon that I forgot to mention. I was on my way to the Art Show when I encountered a young woman with a beastie perched on her shoulder. I thought it was a regular doll, until it moved. It was a puppet, which the woman controlled with a handheld widget.

Then her friend joined her, and, well. The blue beastie is cute, I think, but that monkey is downright creepy. The women bought them at the Bristol Renaissance Faire, which is local for me. I should visit sometime. would love one of those creatures…though maybe not that monkey. 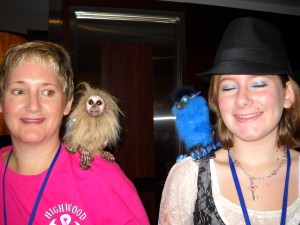 Time to get to work, so I will wrap up with a grasshopper-with-a-death-wish that I spotted perched on the old TV aerial, well above the ground. I watched it as I sat on the deck–all it did was walk back and forth along the short crossbar. If it made it through the evening without a swift or bat spotting it, I would be surprised. It reminded me of those caterpillars(?) I’ve read about that are invaded by parasites that take over their minds and force them to climb trees and perch in full view of predators, the goal being that they get eaten so the parasite can spread. 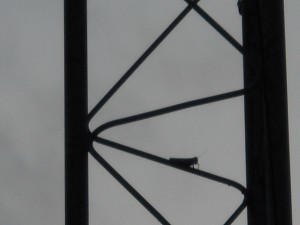 And finally, my rain gauge hummingbird, with bonus Gaby. 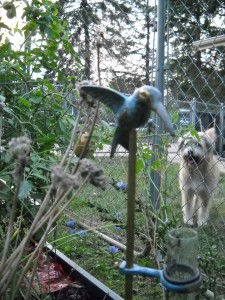