Decided I would have Sunday’s roast chicken today. Once again, I used the splayed method from this NYT article, except that instead of a 12-inch cast iron skillet, I’m using a 12″ stainless steel casserole–the thing looks like a saute pan sans handle, and worked a treat the first time I made chicken this way.

This time, I went for it and set the oven to 500F. Stuffed the bird with homegrown tarragon and thyme as well as a quartered lemon. Used 1 teaspoon salt for a 6-pound bird–that’s much less than the cooking sites recommend.

A half-hour in, I added chopped onion and fennel, along with a few stalks of celery.

The Swiss chard that bolted in late spring has long since coughed up its seeds. Lately, it’s been putting forth branches studded with bunches of small, tender leaves, which are perfect for salads, saute, or in today’s experiment, tucking into the roast chicken juices for the last five minutes of cooking. I also added some baby bella mushrooms because, well, I had them on hand. 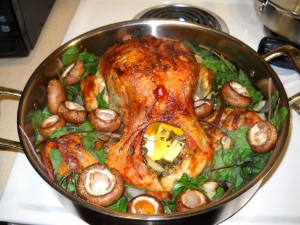 The verdict? I could have added a little more salt. Maybe two teaspoons. A tablespoon would have been waay too much. I also think the celery was a mistake. It added a little too much liquid, which made for a thinner sauce. Still nice, but since it soaked into the lower half of the chicken, that part was more braised than roasted. OTOH, drumsticks that cooked in a broth made from chicken juice, onion, fennel, thyme, lemon, tarragon, and a shot of rosé are drumsticks that turn out pretty damn tasty.

I also think the elevated temps are taking a toll on the casserole. It’s a Cuisinart Pro, which is really nice, heavy-duty stuff. But 500F is the limit, and the outside of the pan has turned a bit iridescent. It’s my starter set of cookware–at some point I will take the plunge and treat myself to a set of All-Clad or Viking–so I’m not too worried. It’s just something to note. If anyone out there has seen the same thing happen to an All-Clad or other high-end brand of stainless steel pan, let me know.

In other news, it’s the first day of autumn. The morning was damp and windy, but as the day went on, the sun emerged and temps warmed a bit. I hung the seasonal wreaths–silk and plastic leaves and berries–on the house and garage, shots of gold and orange amid the dull green foliage and cream color house. The pups spent most of the day outside, and Gabbers is still lying out on the lawn. King is inside because 1) he smelled the roasting chicken and 2) it’s closing in on puppy dinnertime.

The hardware big box that I dropped by today already had Christmas decorations out. Halloween still 6 weeks away, and the fall decorations were already the secondary display. Not ready.

And Saturday is winding down. Not ready for that, either.