Way behind on Worldcon blogging. But, I didn’t want to pay for the in-room wifi, and while I did check email using the free public connection, I just didn’t want to spend a lot of time online. People to talk to. Things to do.

I attended the Hugos last night, went to a couple of parties, then adjourned to the bar for the rest of the evening. Around midnight, ran into Michelle Sagara West–we sat and talked until, ahem, 6am.

Michelle then fled because she had to try to catch a few winks before getting up at 830am to catch a cab to the airport. I requested a late check-out. Awoke around 10am. Showered. Packed. The plan was then to nab bellman to cart bags downstairs and stash them while I caught late breakfast/early lunch. Then off I would go.

But. 1200 rooms checking out this morning. When I phoned the bell stand, they said the wait would be an hour. Since it was getting close to my extended check-out deadline of 1pm, I went downstairs, had a really nice burger, then came back up and tried the bell stand again. I was told the wait was still an hour, but the dispatcher remembered my previous call and said she would send someone up as soon as they were available.

So. I settled down with my iPad and Richard Kadrey’s DEVIL SAID BANG, expecting a wait. Five minutes later, I heard a knock on the door. Bellman! While I called for Kuro, he loaded all my stuff. Kuro was waiting for me by the time I turned in my keycards. Got the car loaded, and by 1pm I was on my way home.

Sunny day. 80s. I never realized how lovely Michigan Avenue is. You don’t see it if you’re walking or hunkered in the back of a cab. But you see it all if you’re at the wheel, the building facades and the trees and flowers.

Easy drive home. The only speed bump came as I pulled into the driveway, when I remembered that I had forgotten to pick up my art. One quicksale, and one bid. I hope I can arrange shipping somehow. We’ll see.

Home. It appears that we had about 3 tenths of an inch of rain over the weekend, the last remains of Isaac. Either that, or I forgot to empty out the gauge when I watered last Wednesday.

More con stuff will follow as it comes back to me. I feel as though I’ve been away a month, which I guess is a good thing. I mentioned elsewhere that I had the neatest room ever, a tiny two-level suite which needed only a convection oven and downstairs sink to make a pretty nice pied-a-terre.

And no, the view isn’t cock-eyed. I can’t get the thumbnail to rotate. The full-size version should be okay. 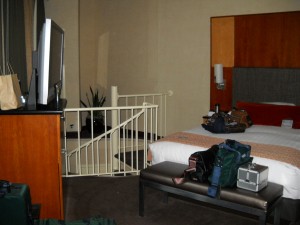 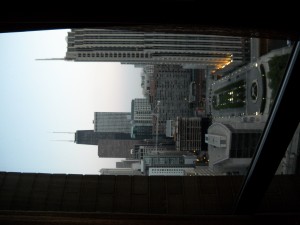 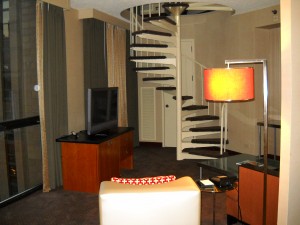