I buy a lot of stuff from King Arthur Flour, and at some point signed up for their emailing list. Sometimes they send recipes, and today they sent a good one: Nantucket Cranberry Cake.

I checked the list of ingredients and had them all–the cranberries have been living in the freezer since last fall, but still looked good. So I pulled all the stuff together, read the recipe again…and made some changes.

Fruit filling: I used cooking spray on the bottom of a 9″ square pan instead of melted butter. I toasted the walnuts before adding them to the cranberries. Found a Bartlett pear that had a few bruises, so cut it up and added that. Got my favorite diced soft ginger in my last KAF order–added 1/4 cup to the fruit. Used turbinado sugar instead of white. Mixed it all up and poured it into the pan: 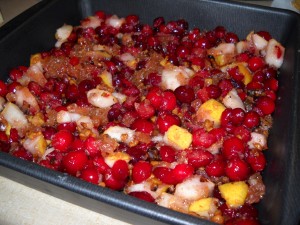 Next came the cake. I goggled over the amount of melted butter, then made a command decision and halved it–6 tablespoons instead of 12. I like butter as much as anyone, but I’m not a fan of buttery baked goods and a stick and a half in such a small amount of dough seemed a bit much. I figured that even if the cake came out dry, I could mash it in the fruit for moisture.

I mixed it with the stand mixer. It came out nice and thick, and I spooned it over the fruit, sprinkled the top with sugar, and baked the mess at 350F for about an hour: 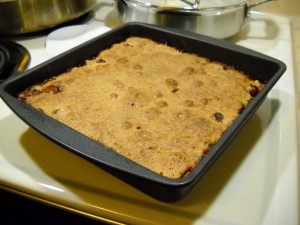 I let it cool for an hour, then dug in. The crust was crisp, and the fruit much less liquidy than I thought it would be: 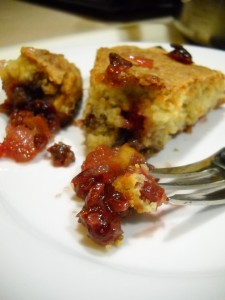 It’s so good. The cake is dense and moist–I think the additional butter would have been overkill, but that’s just me. Next time–and there will most certainly be a next time–I will either use an 8″ pan or add more fruit to the 9″. The addition of the ginger is a winner–it works with pears a treat and adds a nice hint of spice. White raisins would be a nice addition. Chopped apple. Hint of cinnamon or allspice. Toasted pecans instead of walnuts.