The autographing tables at Chicon were located in Back of Beyond, in a large space behind the Dealers Room that also contained displays, con tables, etc. Folks wandered in and out, some in costume.

During my Friday afternoon stint, someone walked by in an amazing yet eerie costume: a skeleton with glowing green eyes, enrobed in shadow-streaked white. I assumed s/he was Death, possibly Pterry’s Death. S/he loomed 8-9 feet in height, and moved with creepy smoothness. I don’t know how s/he managed to keep their balance while manipulating their arms and walking, but it was a sight.

After a few minutes’ walking around, Death stopped in front of a screen to pose for pictures. Quite a few of us dug out our cameras and snapped away. As we did, a little girl–3 years old, maybe?–walked up to Death and with no sign of fear whatsoever held out her hand. 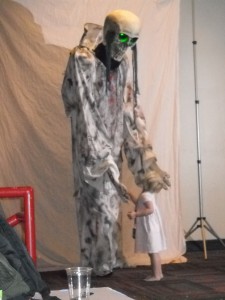 Death gently took her hand. I was too far away to hear if s/he said anything, but s/he may have because the little girl turned and pointed. I snapped another pic as she did so.

Sometime later, I downloaded the pics and checked them out and…oh…. 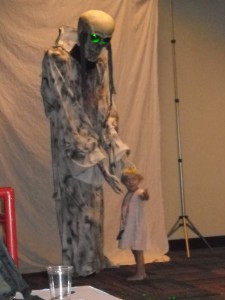 I thought for a moment that she had pointed at me, but I assume that she was pointing to her parents. Yes, that’s it. Parents.