I have actually been harvesting for the past couple of weeks, but the take has been limited to one or two big tomatoes at a time, or a handful of cherries. This is the first significant haul, and given the number of greenies on the Black Cherry, it won’t be the last. 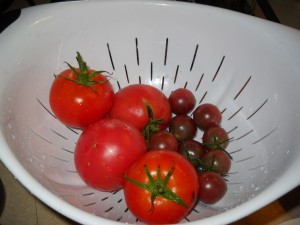 It’s hard to tell thanks to the lighting, but the middle two large tomatoes have a pinkish cast–those are the Arkansas Traveler. The ones on either side with the orange tinge are the St Pierre. The Black Cherry…well, it’s obvious.

The raised bed St Pierre and Arkansas Traveler have maybe 6-8 large fruit in various stages of ripening, while the Sel. Franchi has 3, including a huge one that looks like two tomatoes that grew together. The St Pierre and Sel. Franchi in the deck pots have 2 tomatoes each, and those look to be all she wrote where they’re concerned. That’s it–no more deck pot tomatoes for me. The take simply isn’t worth the effort.

I cut up some of the Black Cherry and the cracked Arkansas Traveler, and added them to some leftover pasta dressed with the last of last summer’s basil pesto. Had some with the grilled swordfish, along with a cantaloupe-nectarine salad. Glass of chenin blanc. Ate out of the deck.