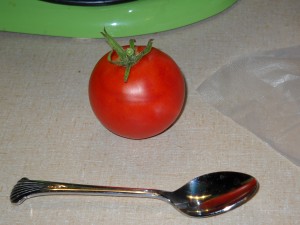 It came from the raised bed St Pierre, which is one of the varieties from Seeds from Italy. Nice-looking, baseball-size fruits.

Looking forward to the Arkansas Traveler, which I have heard is a tasty variety. Tried one of the Black Cherry, which look like miniature Black Crim. Again, mild flavor, with none of the salty bite I associate with “black” tomatoes. It’s possible I may have picked it too soon. I will have many more opportunities to sample, though, because the vine just exploded. There must be well over a hundred tomatoes in various stages of ripening, and the vine itself is already outgrowing the double-stacked cage that’s enclosing it.

In other tomato news, I saw signs this morning that a hornworm was about. I hunted for the blasted thing, but couldn’t find it. Checked again this evening, and found some chewed spots on both the St Pierre and the Black Cherry. Kept hunting, and found the guilty party hanging upside down near the remains of a green cherry tomato, so stuffed that it didn’t move when I poked it with the garden shears. I sprayed it with the organic DIE MONSTER DIE and cast it out.

1 thought on “First tomato of the year!”