It’s supposed to be one of those basic, simple dishes that anyone can pull off, but I have always had problems guessing when it’s done. I have stuck temp probes in the thickest part of the thigh, checked that the juice ran clear when I cut where thigh joined body, and over-roasted until the breast meat dried out. It didn’t matter. I would swear the chicken of the day was done, take it out of the oven, and start cutting it up only to find that it was underdone at the thigh joint.

So, when I stumbled over this article in the NYT Food section about roasting chicken in a cast iron fry pan, I thought it might solve my problem. Sticking the chicken in a pre-heated pan meant that it would start cooking immediately. Splaying the legs the way Clark suggested would allow the heat to hit the interior parts of the chicken right away, and eliminate the risk of undercooking.

Minor issues presented. I had a 10″ cast iron pan, but not a 12″. Given that the chickens I had in the deep-freeze averaged 6 pounds, I knew there was no way I could cram one in a 10″ pan. I debated buying a 12″, but never got around to it. This weekend, couldn’t find the time.

I had resigned myself to another roast pan attempt when I remembered that I had a round 12″ stainless casserole that was pretty much a sauté pan without the handle. It’s supposed to be able to take 500F, but I decided to play it safe and set the temp to 475F. I salted and peppered the bird inside and out, then stuffed the cavity with half a lemon and a bunch of thyme. Then I splayed the legs, and tucked it into the preheated pan. Patted it with a little olive oil. While it cooked, I sliced an onion and a couple of small fennel bulbs, and after thirty minutes tucked them around the chicken. After another half-hour, I added five sliced garlic cloves, then let things cook for another twenty minutes. I may have let it go a little long, but I wanted the onion to caramelize, and I was still a little paranoid about the chicken being underdone. 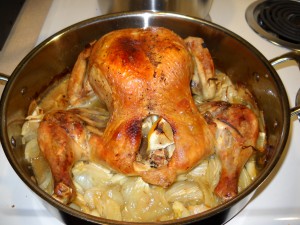 It’s not as pretty as a classic roast chicken, but oh dear, it was the best I have ever made. Drumsticks were tender, thigh meat was cooked, breast meat was still juicy. The onion and garlic tasted sweet, the fennel was beyond tender, and the sauce was golden and lovely.

This is how I will be roasting chicken from now on. Next time, I may even try those things called ramps.