It’s so gorgeous outside–70s, sunny, northish breeze–that I want to spend as much time as possible on the deck or in the yard. But things need doing, so I have to pop inside to do them. Two loads laundry washed and dried, and bedding changed. A little vacuuming. Recycling somewhat sorted. Lamb burgers for late lunch, so I still need to get those made.

I did make the goat cheese tarts yesterday, and they turned out well. I read the comments on the recipe webpage before getting started, and saw that the onions needed to be really well-cooked and almost dry or the tarts would be too heavy. Maybe it’s because I have an electric range or maybe my version of “medium-low heat” was too low, but I wound up sautéing the onions 2x as long as was called for in the recipe. They reduced in volume by at least 2/3rds, but turned out light brown and slightly sweet, which I think was the point. I used four of the freshly-harvested Siberian tomatoes, along with my own basil and thyme. 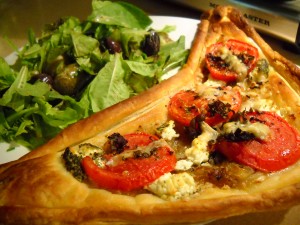 The only mistake I made was in deciding I was not going to waste any puff pastry. Instead of cutting 6″ rounds, I just cut the sheets on the diagonal. Very rustic looking, and given that these tarts are light on the filling, a little too heavy on the puff pastry. But the filling is very nice. Will make again. I may use pizza dough, though, as the puff pastry is a little heavy. This filling would make for a dynamite pizza.