Not the people or the dogs. The tomatoes.

Finally, some big tomatoes. Last year, I harvested the first biggie, a Black Crim, on August 3rd. This year, we’re 3-4 weeks behind because of the cold spring; the Siberians come in a couple of weeks earlier than other varieties, so it may be another week or two until I can take any others. The frankenfruitiest Aunt Ginny is starting to turn, though, as are both the deck pot and raised bed Mountain Fresh. The Tommy Toe cherry is loaded. 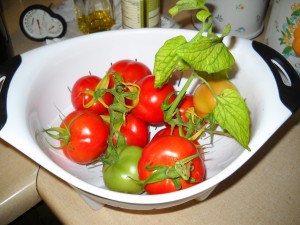 Yeah, they’re small. It’s the way they are. The greenie was on the same stalk/branch/shoot as 4 ripe tomatoes. Not sure what its problem is, but I will stick it in a paper bag and see if it ripens. The goldie was an accident. Cut the wrong branch. It will go in the bag with the greenie.

Not sure what to do with them. Not enough for sauce. I still have mesclun, so there’s salad. But I saw Ina Garten make goat cheese tarts last week, and seeing as I’m in the mood for something different, I may go with that.

Had some of the leftover roasted veggie soup this evening. It was good last night, but I thought it could have used some dressing up. So tonight I sliced up a chicken-apple sausage and browned it in a little olive oil, then added the soup to warm. Then, to go with the sausage and the curry powder that I had added last night, I topped it with a spoonful of last fall’s crabapple chutney. Much better. It needed that little bit of sweet. Had it with buttered sourdough and a bottle of Gray’s Oatmeal Stout.