It was three years ago yesterday that I decided to bring home an underweight, quiet little girl that someone had left tied to the front door of my vet’s office. I brought her here on a Friday, intending the weekend as a test run. I had to make sure that she and King would get along, and that she wouldn’t get hurt when they roughhoused.

I guess you could say things worked out.

I take Gaby in tomorrow morning to get her teeth cleaned. Our vet told me during our Saturday visit that every time she sees Gaby, she tells the techs her story. I decided to assemble a quick Before and After 2-shot photo album that I will give to Dr Vet tomorrow: 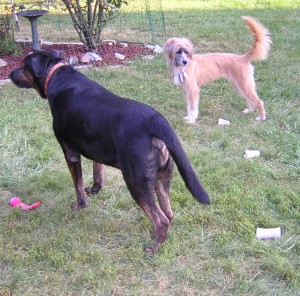 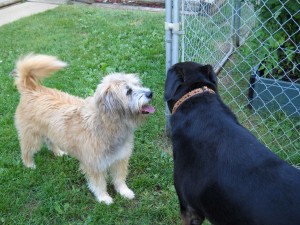 I know I talk about it a lot, but the difference between Gaby Then and Gaby Now boggles me. Yes, that is the same dog, 19 pounds later. She looks a little hefty in the second photo, but it’s the angle. She’s a good weight at 45 pounds. At least 5 pounds of it is hair.